There are two categories of cellular agricultural products: cellular and acellular. Cellular products are made from whole cells—living or dead— and include products like beef, poultry, and fish. Acellular products are made from products that are made by cells and do not include any living or once-living cells. Examples of acellular products include omega-3 fatty acids, gelatin, casein, and ovalbumin. Cellular agriculture is a technology that provides opportunities to improve upon trade-offs of traditional agricultural practices and methods for meat production, such as animal welfare, environmental impact, and nutritional value.

According to Dr. Mark Post of Maastricht University, who in 2013 created the first cultured beef burger, it takes 440,000 cows to produce 1,750,000 burgers; the same number of burgers could be cultured from the cells of one cow using cellular agriculture techniques. Proponents of cellular agriculture highlight this potential for reduction in animal suffering compared to traditional livestock practices. Erin Kim, communication director of New Harvest, believes "There is simply no more room left to pack more animals onto land, or meat onto the breast of a boiler chicken."

In 2017, the US National Academies of Science, Engineering, and Medicine recognized that the cellular agriculture industry, especially brewery-based in-vitro animal products, is set for high growth in the future due to recent technological advancements. The process of culturing products through cellular agriculture involves extracting and isolating self-renewing cells, such as embryonic or induced pluripotent stem cells, and/or introducing genes into organisms capable of producing the desired product, such as milk proteins, collagen, or muscle tissues, and letting these cells grow in a bioreactor.

Ross Harrison was one of the first scientists to develop what would later become cellular agriculture. In 1912, he wrote in his paper titled "The cultivation of tissues in extraneous media as a method of morphogenetic study"

The fact that tissues of the higher animals may be cultivated outside the body has been heralded in the newspapers and magazines as a notable, if not revolutionary, scientific discovery."

Harrison pioneered the first methods for the in vitro cultivation of cellular tissues grown outside of animal organisms. Harrison's methods were originally developed to study the conditions promoting differentiation of nerve fibers, and his techniques were modified to study the effects of salts and various animal extracts on animal tissue growth independently and separately from the animal organism. Harrison continued his research, trying to keep tissues alive and growing, before coming to the conclusion that optimal survival and growth could be achieved by continuously supplying the tissues with a growth medium while constantly removing waste products. With this, the first concept of a bioreactor was born. 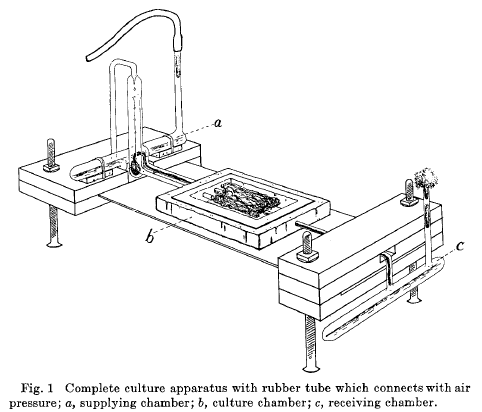 First known bioreactor for tissue culturing made by Ross Harrison in 1912. 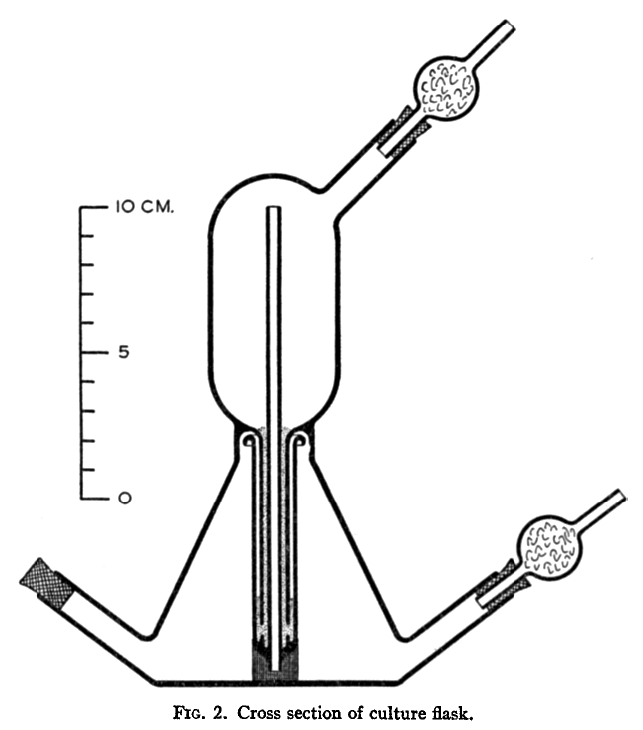 In 1939, Dr. Raymond C. Parker and the laboratories at the Rockefeller Institute for medical research produced the second major technological breakthrough for cultivating tissues independent of animals—a single flask culturing technique. Parker designed many new systems for culturing large numbers of tissue fragments and pioneered the single flask technique by making two separate chambers within a single flask. A reservoir chamber holds the culture medium, and a culture chamber contains the tissue fragments. The researchers were able to control the oxygenation of chambers within the flask by connecting a gas line to the flask. By growing tissues on a thin layer of nutritional medium with sufficient and constantly circulating oxygen, scientists were able to begin culturing tissue fragments in large quantities. 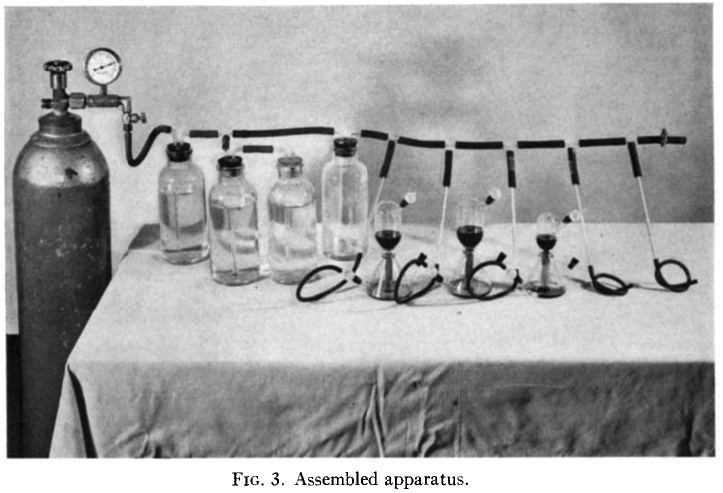 Series of culturing flasks connected to a gas line.

A 2015 study titled "Anticipatory Life Cycle Analysis of In Vitro Biomass Cultivation for Cultured Meat Production in the United States" further examined cellular agriculture for meat production, with less hopeful results for the environment. They found cellular agriculture uses more energy than previously thought, due to the industrial nature of cultured meat production. The study found that culturing beef and poultry products used approximately up to 35% more energy than traditional agricultural techniques. Researchers made their energy use (approximately 43% natural gas, 33% coal, and 16% from the electricity grid) and greenhouse gas emission estimates based on the average energy requirements and greenhouse gas emissions of breweries across the US in 2003, as reported by the Lawrence Berkeley National Laboratory.

The study demonstrated significantly less land use—roughly half the amount of traditional European livestock agriculture—needed for production, due to not requiring animal feed to produce cultured meat products.

This reduction in land requirements is due to the improvements in the biological efficiency of cultured meat made possible through cellular agriculture. Traditional livestock requires food and energy to grow biological parts that are not the primary desire of livestock farmers. For example, animals have to make things such as skin, internal organs, and hair, while meat grown in vitro only grows whatever product is desired—usually skeletal muscle tissue, in the case of cultured meat.

By growing meat in vitro and not having the need to grow skin, hair, organs, circulatory system, etc., comes at the cost of having to regulate temperature, disperse and introduce nutrients and oxygen into the tissue evenly, and control for any pathogens that can infect the tissue. This is all done inside the bioreactors used to grow cultured meat products, which requires high amounts of industrial energy, as detailed in Carolyn Mattick's paper "Cellular agriculture: The coming revolution in food production," published in the Bulletin of the Atomic Scientists on January 8th, 2018.

Some scientists believe as the technology supporting cellular agriculture progresses, the industry will require fewer inputs and less maintenance of the bioreactors that makes products like cultured meat possible, and the full extent of environmental implications of cellular agriculture will be realized.

Impact on oceans and freshwater systems

There is no need for pesticides and herbicides to make animal products using cellular agriculture. Less pesticide and herbicide use made possible by cellular agriculture will help reduce ocean eutrophication—when a body of water becomes enriched in dissolved nutrients from agricultural runoff stimulates the growth of aquatic plant life, usually resulting in the depletion of dissolved oxygen. The reduction in eutrophication can play a significant role in the restoration of the oceanic dead zones (low oxygen areas) back to productive marine ecosystems.

People for the Ethical Treatment of Animals (PETA) offered a $1 million prize to the first company to produce, and bring to market, cultured chicken meat that is price competitive in at least 10 states and is indistinguishable from real chicken meat by June 30th, 2012. PETA extended the deadline to March 2014, but the prize was never claimed by anyone.

Van Eelen Willem Frederik, known as the godfather of cultured meat, filed and was later awarded the first patent for cultured meat production. His patent was titled "Industrial production of meat using cell culture methods" and was awarded grant status on September 18th, 2007.

In 1995, the Food and Drug Administration approves in-vitro cultured meat production for commercial purposes in the United States.

Ross Harrison pioneered the first methods for the in vitro cultivation of cellular tissues grown outside of animal organisms.

First animal tissue recorded to survive outside of the animal organism

Alexis Carrel, a French surgeon and biologist at the Rockefeller institute in New York, and his colleagues ran experiments from 1911 to 1946 growing chick heart muscle tissues in petri dishes. Their cellular cultures were shown to outlive normal chick muscle tissue cells (over two months) helping formulate the idea of cellular immortality and contributing greatly to cellular aging research.